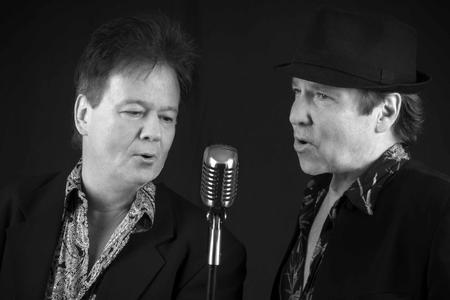 Two Guys From Vegas!
Classic Rock, Comedy, and Impressions
With A Vegas Flair!

Dino Perelli & Art Porrello have been performing in Las Vegas since
the mid seventies.
They each have a long track record of performing venues in Las Vegas
from local clubs and casino lounges, to hotel showrooms!
Their repertoire covers the most popular artists from the 50's to the 90's! Their song list is so extensive, that they can  virtually play to any type of crowd.
Having both been frontmen for various acts, together they make for an evening of pure entertainment, laughs, and exceptional music.
Their new act "Two Guys From Vegas" is now playing in Florida.
Don't miss these two Las Vegas legends!
They're both inductees in The Las Vegas Rock & Roll Hall of Fame!